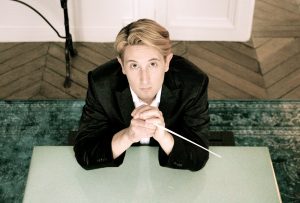 Clément Mao – Takacs is one of the young rising stars of the new generation of conductors.

He graduated from the Conservatoire Supérieur de Musique et de Danse de Paris and the Accademia Chigiana in Sienna, is a laureate of the Bayreuth Festival and in 2008 he was awarded the Prix « Jeune Talent » by the Fondation del Duca (Institut de France / Académie des Beaux-Arts).

In 2013, he was the first conductor laureate of the Fondation Cziffra.

He started his career as conductor at a very early age –quite literally a calling– as he conducted his first concert at only 15 in Salle Gaveau (Paris). After completing his studies, he became Janos Komives’s assistant at the National Opera of Budapest (2002) and for several productions and recordings in France (2001-2003). He was then signed in by Gianluigi Gelmetti, musical director of the Roma Opera, and became his assistant for five years (2003-2008). In the same years he also became the musical director (2004-2010) of Orchestre Sérénade. He has been invited as a guest conductor by the Camerata Strumentale “Città di Pratro”, the Wind Ensemble of the CNSMDP, the Festival Orchestra of Sofia, the ensembles Aquilon and Initium. He recently started collaborating with Avanti! Chamber Orchestra. In late 2016, he will conduct the Orchestre de Bretagne and make his American debut in New York City with ICE Ensemble.

In 2011 he founded Secession Orchestra, in which he serves as both artistic and musical director. Immediately receiving critical accolades for its excellence and cohesion, Secession Orchestra has played several concerts in France and in Europe. Apart from its season of symphonic concerts in Paris, Secession Orchestra has also performed with actors Charles Berling, Didier Sandre, Antoine Duléry, Claude Jamain, Laurence Cordier, Julie Depardieu and Brigitte Fossey. In 2013/2014, Secession Orchestra premiered and toured in Europe the chamber version of La Passion de Simone (Kaija Saariaho) in the production of the collective La Chambre aux échos. Clément Mao – Takacs opened with his ensemble the 2015 edition of the Festival de Deauville with a critically acclaimed Webern/Wagner/Mahler triple-bill, and they will perform together in 2017 at the Auditorium du Louvre and the Festival Présences in Radio-France. Since 2014, they enjoy artistic residencies in both Fondation Singer-Polignac and Festival de Saint-Denis.

Clément Mao – Takacs’s technical craftsmanship, broad knowledge of the repertoire and artistic standards are unanimously acknowledged and appreciated, in both the classical and the contemporary repertoires, especially in the pivotal 1850-1950 period to which he has given much focus. He is the dedicatee and first performer of many works (Bargielski, Ballereau, Komives, Feldman, Sikorski, Svensson, Letouvet, Adams, Saariaho, Tarnanen, Stubbe-Tejbjaerg, Mu-Xuan Lin, Vincze, Ashton, Lang, Sciarrino, Koskinen…).

As a specialist of Kaija Saariaho’s music, he has conducted the world premiere and many national premieres of La Passion de Simone’s chamber version, in festivals such as Melos-Ethos (Bratislava – Slovakia), Codes (Lublin – Poland), the Festival de Saint-Denis and at the National Theatre of Clermont-Ferrand in France. He conducted it also in Copenhagen in 2016, alongside the iconic masterpiece Lichtbogen and the Danish premiere of the concerto Notes on Light, also programming on a regular basis other works by the same composer (Novalis Festival, BOZAR Opening Night). In 2016/2017, he will conduct her music in New York City and for Radio-France.

He conducts as enthusiastically and fondly the classical repertoire (Mozart, Beethoven, Schubert, Brahms…) and his favourite period running from the end of the 19th century to the heart of the 20th (Mahler, Debussy, Ravel, Bartók, Strawinsky…). In all types and genres of music, he is most devoted to musical architecture, to the clarity of orchestral textures and to serving each composers’ musical world and style.

He also has a particular interest in cross-disciplinary encounters: with Noh dancer Claude Jamain, he has created a segment of his cycle THE MAHLER EXPERIENCE; with Korean visual artist Nam-Hong he crafted a performance blending contemporary art with shamanistic rituals as an event of the France-Korea Year. Always looking for new artistic forms, he likes bringing music in unprecedented frameworks and formats, such as the OPENING NIGHT of BOZAR in Brussels, for which he created a series of six concerts performed without interruption during a five-hour period and culminating in Transgressions, a concert thought of as a dialogue between an orchestra and electronic remixes that faded into a clubbing party.

The operatic repertoire is of utmost importance for this lover of literature and drama, who thinks of opera as a privileged setting for intense collaborations. His encounter with Peter Sellars was decisive, and he enjoys friendly collaborations with many actors and directors who operate in various aesthetics (Olivier Py, Michel Fau…), first and foremost Aleksi Barrière with whom he founded and runs the collective La Chambre aux échos.